The Reiki Principles and Tarot Elements.

This article was originally published on Reiki Rays:
https://reikirays.com/82055/the-reiki-principles-and-tarot-elements/
This is something that came to me while teaching a Reiki lesson to students that have also been to my Tarot classes. One of my students then noticed how the Reiki principles also track with the four cardinal directions.

For me, this connection provides an enrichment between these.

And now we combine them.


In knowing these, when I do a Tarot spread to help with a conscious, I can be mindful of where I may need to strengthen a Reiki principle in my life in relation to the question. Or even tell me that I'm doing better than I think I am! Some examples:
Here are some reading examples.
A quick one card reading, "What do I need to keep in mind today?"
I pull a Queen of Swords. 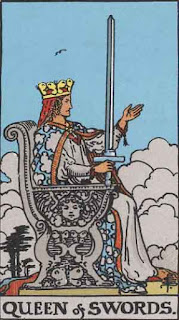 Swords is what I call the "cutting through the BS" suit. It's also about transformation, thoughts, reasoning, truth, and ethical logical behavior. The Queen of Swords is a logical person who gets things done, and is meticulous, but can be quite stern. This card could be reminding me that part of doing my work honestly is stay true to my personal code of ethics and not let others pressure me into doing something that's a bit underhanded. So I could say, Ah, swords, a reminder to do my work honestly, and to be sure that I see things clearly and logically.
Here is a spread for Body Mind and Spirit. What are things going to look today (or this trip, or this visit, etc) for my Body Mind Spirit?

1: Body
5 of Pentacles, ah, pentacles, I need to remember to feel grateful for what I do have. My physical self will needs some tender loving care because its gonna feel impoverished about something, maybe from lack sleep, or sleeping wrong, or over exercising, etc. Now I am prepared, I can talk softly and kindly to my body and remember to be grateful and feel grateful for my body as it is, no judgments attached.
2: Mind
Wheel of Fortune, ah, major arcana card, spirit, I will be kind to every living thing, including myself. Wheel of Fortune, okay, the rolling-with-the-punches this-too-shall-pass card. I need a  "I got this kind" of attitude and help from guides to make things run more smoothing. Just roll with it. In this way my mind will be sharp and accepting and thus able to feel kindness no matter what is going on.
3: Spirit
10 of Cups. Spiritually, I'm rocking it, all is well and wonderful! Look at that rainbow of 10 of cups. So much joy and hope right now! I don't even have to worry about being worried. Just for today I will not be blinded by worry will be EASY, like it's not even there at all! Awesome.
All three taken together we have, in short:  gratitude of body, kindness of mind, easily worry-free of spirit, no matter what's going on during this challenging day; simply rolling with it all in good humor - calm of heart, and clear of mind.
Posted by Ruth ~ Lady of Radiant Joy at 12:15 PM No comments: 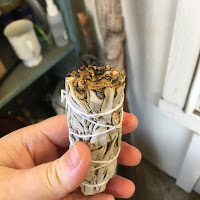 As you all know, I am always doing my best to be thoughtful and inclusive, and to be aware of my white privilege in relation to marginalized groups. I am part of a wonderful Facebook group that has many different American Indians* and the subject of smudging and burning Palos Santos came up. In an effort to amplify Native voices I asked Ilea if I could quote them, and I am so happy they said yes!
Ilea Wakelin speaks on smudging!

"Actually *pushes up nerd glasses*, smudge is an Old English word that means Smoky fire.
"When early English Anthropologists came to North America they treated the indigenous peoples as homogeneous (which they are not). There are several different types of smoke cleansing ceremonies across many different tribes, and each has its own unique word in that tribe language. However the English decided to blanket name them all "smudging".
"So it would be more correct to say that smudging is actually several different specific cultural practices which all share the same name. And you will find Native Americans from different tribes who all do it in different ways. From the very deep and personal smudging ceremony which involves a ritualistic exchange of tobacco to the sage plant before cutting it yourself and then specific hand movements, and specific ways to light the sage etcetera, all the way to a native American who will wave around a sage wand inside used car they bought on Kijiji. And ALL are valid uses of the word.
"Some Native Americans sell white sage, others find that practice taboo. There is no consensus as Native Americans are not a hive mind nor are they from the same tribes.
"Overall it's preferable to leave the choice up to the individual doing the practice, and listen to your local tribes voices when making that personal decision. For example my local tribe of the lower Kootenay band highly encourages the purchase, and use of white sage as well as calling it smudging when you do so. They wish for these Traditions to be kept alive, passed on, and more importantly normalized. So I listen to my local band on this matter.
"Take away from all of this is that everyone's personal spiritual path is their own, and it is up to no one else to tell another person how to practice spiritually."

"...my father's side of the family is actually from Venezuela, and they also have sustainable Palo Santo Industries. They only use Deadfall for harvesting, one because it's extremely taboo to cut a branch from a live tree, and two for the wood to have the proper maturity with its resins it needs to sit for about 4 to 10 years.
"In the dry tropical reasons it's actually the dominant tree and extremely abundant, but you get performing allies running around saying that it's endangered, or worse yet saying that it's a closed practice. My family actually has friends in Venezuela who harvest and chop the wood. The work sustains their family, and again it's done sustainably. All the woke people running around saying that the wood is endangered, or is the practice is closed is actually hurting the local indigenous people."

I also discovered in that same thread that there is a Scottish for smudging called saining. Pronounced sane-ing. To me that sounds like "to make sane." Well then. That's just hilarious and great, so I think I will use the Scottish word from now on; and considering that I am part Scottish it seems extra fitting.
*note: I use the term American Indian because it appears that is what is preferred by those who live on reservations as it makes clear that we are talking about the first peoples of the USA. See cool video no it also supplied by Ilea: https://youtu.be/kh88fVP2FWQ
Posted by Ruth ~ Lady of Radiant Joy at 2:53 PM No comments:

Having that intuitive prompting to do something is really interesting sometimes. I saw that a crystal seller based in Canada was doing a live sale on Instagram. I felt like going to it. Then I was doing a few things and then I was like oh, she is still going, so I popped on.

I thought it odd since, I have already spent plenty of cash on Settara Stones, a crystal seller on IG based here in CA.

Anyway, I popped on, and then she shows Vanidinite. She was asked the metaphysical properties but wasn't sure and said if anyone knows to comment. So I looked it up in my Encyclopedia of Crystals book by Judy Hall. Some cool zen things, and accepting being here on earth in dense matter. Nice!

And then there is a note. That it's TOXIC and to HANDLE WITH CARE.

The seller did NOT mention this at all! So, I said all the cool metaphysical things, and then mentioned THAT.

People were like whaaa!? And the seller was like oh yeah, be careful. And we cracked jokes about not licking crystals and no water elixirs for this one, and stuff.

If I had not been there. Someone might have been hurt. Or a pet. Or child. Now everyone who bought one knows.

I had no idea. I almost didn't listen. I'm so glad I did.

Posted by Ruth ~ Lady of Radiant Joy at 7:53 PM No comments: