The Deck That Made Me Brave

Before I bought my first physical deck, I only used phone apps. It was easier to hide the Tarot you see, because good Mormon girls don't use the Tarot.

The first Tarot deck I ever wanted was a novelty deck from the Escaflowne anime. I was so excited to see a DVD offer to get one for free while supplies last! Unfortunately, I told my mother about it first who basically told me in no uncertain terms, that I was not allowed to have. If I got the deck I would start using it and relying on the deck instead of Jesus Christ, and being a bad influence on my younger siblings (I'm the third out of eight children).

Years later, married with my own singular spawn, I found myself in an FB group about developing your spiritual gifts from a Mormon perspective. Some people there talked about how much they loved oracle cards. Some mentioned that they will use oracle, but never Tarot because they thought the Devil card and the Death card were evil. A couple said that they didn't have a problem with those but understood the view. While I got into oracle, Tarot was still in my mind.

Because you see, I would still look for Hitomi's Tarot Cards from Escaflowne. I could always find them for sale but they would cost about three hundred dollars or so. I knew I only wanted them because they came from the anime, and that I wasn't going to misuse them as my mother predicted I would. 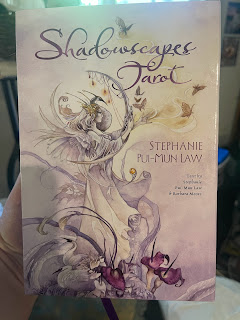 And well, these other Mormon women, developing their spiritual gifts made some interesting points, so I decided to download free Tarot apps onto my then-android phone. Some of those apps were so badly designed, but yet, I would open them up, randomly pull a card and feel like I got what I needed. I discovered the Galaxy Tarot app (my favorite Tarot app of all time, on Android phones/tablets only). I started to learn the cards a little more and found that the Death card and the Devil card and other "scary" "negative" cards had been misunderstood by some of those ladies in the FB group.

Yet still, I never intended to buy a physical deck.  This was my little secret. I didn't even think I would ever get that Escaflowne deck because dang, who has that kind of money laying around? Not me!

Then, Memorial weekend, in 2015, I went to BayCon, a Bay Area general science fiction and fantasy. I started going every year for my birthday. That year, I went with ZERO spending money. I spent my time going to the different writing panels. However, my big sister was attending as well and I went to the dealer's room with her (she gave me twenty to spend for my birthday out of her own very limited budget). Therein, I saw the artist guest of honor's table. Stephanie Pui-Mun Law. She had all sorts of things, but also a Tarot deck, and two big ol' special Tarot art books, one for the major arcana, one for the minor.

Let me tell you, her art was breathtaking. I liked the cover of the big convention book with her work on it, but that Tarot. Her Tarot art had me spinning in stunned delight and joy. The Death card had me reeling and I wanted to cry for the beauty of it, and for the beauty of the rest of the cards.

Except, I could not afford to buy her deck. I got Stephanie's business card and she reassured me that yes, I would be able to buy the deck later after the convention. I felt so worried that this was going to end up being an unintended lie, as sometimes happens. But, there was nothing I could do but take it up on faith. This deck was so powerful to me, that I started telling my sister about how I have been using Tarot apps as the Spirit guided me. While she was dubious, there was no dispute that Stephanie's art was simply that stunning.

The Shadowscapes Tarot is still my favorite deck of all time.

Here is the link to her website where you can see all the cards! https://www.shadowscapes.com/Tarot/cardsmain.php?suit=0 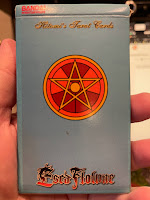 Bonus note: I now have the Escaflowne novelty deck. Robert, my spouse, bought it for me when he found it for about a hundred dollars!
I rarely use it, but it's a joy to have.

Another bonus, my mom is now hella chill with me and Tarot!

Please, no sales, or spam, or links to services in your comments. Questions and related stories are always welcome!